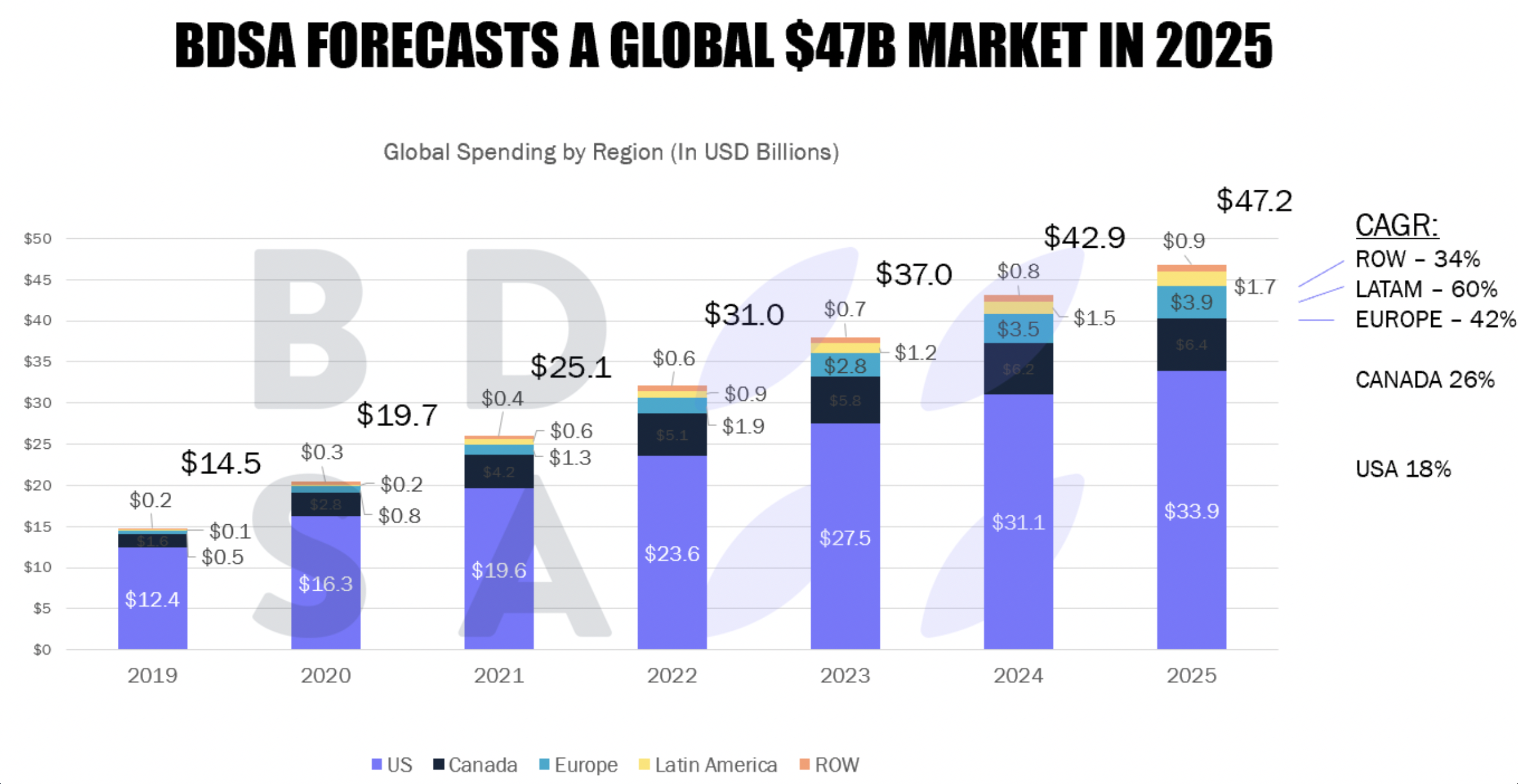 Cannabis data and research company BDSA projects U.S. cannabis sales to grow from $25 billion in 2021 to $42 billion by 2026, with the new and emerging markets driving the majority of that growth, according to the company’s fall 2022 global cannabis market forecast.

Cannabis Business Times spoke with BDSA CEO Roy Bingham to gather the company’s predictions on where the industry is headed in 2023 based on findings from its market forecast report.

Bingham says the company anticipates price compression and competition from the illicit market to continue to be a challenge for operators in 2023. The company also anticipates sales in mature markets to continue to decline in the new year, while sales in new and emerging markets, like New York and New Jersey, will see brisk growth.

Here, Bingham offers additional insight into what to expect going into next year.

AR: Does BDSA anticipate price compression and competition from the illicit market to continue challenging cannabis operators in 2023?

RB: Yes, we do. Unfortunately, we see the illicit market being a factor in certain states. I’m always worried about generalizing, but it is a significant factor in California, for example. (Editor’s note: According to a Los Angeles Times special report, unlicensed cannabis operations outnumber licensed operations in many of California’s most extensive cultivation areas, such as Trinity, Mendocino and Humboldt counties, by 10 to 1, CBT reported.)

It’s also a significant factor in some of the newer markets like New York, and it’s unfair competition for the players who are going through the licensing process or have gone through the licensing process. What does it do? Well, it causes price compression because it means that there’s an excess live wholesale product, but also because the illicit channel doesn’t carry the burden of expenses and additional taxes. Therefore, on a comparative basis for a consumer, especially when a consumer can’t always tell whether it’s a licensed dispensary or an unlicensed one, they’re going to find less expensive products most of the time in the unlicensed channels.

It’s a significant factor this year, and we expect it to continue to be quite severe in some markets and moderate in other markets where there isn’t very much of an illicit market.

AR: You mentioned New York, which is anticipated to launch its adult-use sales Dec. 29. Why did you add New York to that equation?

RB: New York seems to have a situation right now where people are purchasing cannabis on every block through illicit sales that are going on without any regulatory intervention. So when licensed stores do open, the question is, what advantages do they have over the illicit operators? And the answer is, apart from what they could generate in terms of awareness; they don’t have great advantages.

AR: In BDSA’s most recent market forecast, the company projects the global cannabis industry to hit $57 billion by 2026. What markets are the main drivers in that projection?

RB: That projection includes, for the first time, really significant numbers coming from overseas, or I should say, not [just] overseas, because Mexico is going to be a major contributor to the numbers. Germany, as well, with its adult-use market for the first time, [and] of course, Canada. We’ve always expected good growth in Canada. But the significant growth drivers in the United States are the emerging markets in the Midwest and the northeast. So northeast is up and running, with Massachusetts, etctrea, and the expansion is coming now with New York and New Jersey.

AR: New York is projected to launch its adult-use market by year-end. What opportunities does New York’s cannabis market provide for the U.S. Industry?

RB: First off, it’s a big state with [nearly] 20 million in population. … We think it will be the third-largest market by 2026, primarily as a result of that population. Will it be an easy path to get to that scale? It doesn’t look like it’s going to be very easy for many of the operators because of the continuing illicit market activity and the regulatory burden and challenges associated with operating legally.

AR: The mature legal cannabis markets in the U.S. saw sales decrease in 2022. Does BDSA forecast mature markets to continue to struggle with price pressure and regulatory issues in 2023? Why or why not?

RB: We think it will continue to be a challenge in California, Colorado, Nevada, Oregon, and Arizona, where prices in 2022 declined significantly, and they drove declines in the overall dollars in those markets. The prices were decreasing so fast that the incremental amount of sales didn’t maintain the pace of the price. So, wholesale prices have also come down steeply in those mature markets. We think that that trend will continue, not as severely as in 2022, but the same pricing pressure is still there.

AR: As more brands enter the market, companies need to focus on differentiating themselves in the marketplace. From a marketing standpoint, what does BDSA expect brands to focus on in 2023?

RB: I think if you start with the types of products that are going to be popular, and based upon what we’ve seen in the second half of 2022, we have optimism for solventless products in edibles and concentrates, for example. So, dab-able and vapable rosin, for example, have grown very significantly. We think that’s a trend that will continue across most states. Live resin vape cartridges have also shown dramatic growth in 2022. We think that’s going to continue because solventless seems to offer a superior flavor profile.

We are [also] seeing companies differentiating their product with both minor cannabinoid and terpene content being called out out as an important feature of the product now, whether they’re being added or they were [already in the] products and now they’re choosing to feature [them].

AR: How does BDSA predict the retail experience will change in 2023?

RB: It’s subject to local regulations, so it varies from state to state. I was recently in Seattle, and I went into a couple of dispensaries there where you have a much more open feel and ability to actually browse the products. You can’t pick them up, but you can certainly walk around, sort of like a boutique shopping experience, which you don’t tend to see. In other states, it tends to be deli-style, and you walk up to the budtender, and you can’t see very much of the products. I was also in Las Vegas a month or two ago, and going to a place like Planet 13, it’s a bit more consumer-friendly, but it’s still sort of structured around the budtender interaction.

We see a continuation of the trends that were established during the COVID-19 [pandemic], such as curbside pickup and delivery, and now we’re seeing various direct-to-consumer methods of delivery being adopted. We also see increasing convenience for the consumer and, wherever possible, a more pleasant and comfortable shopping experience for consumers to be a high priority for retailers.

AR: Is there anything I missed or you think would be beneficial to add?

RB: No, what we are seeing is an increase in sophistication and education efforts for consumers. … Consumers are getting better informed, which is driving the interest in minor cannabinoids and terpenes, for example. And [with] the opportunity to trial products, we are still expecting that to lead to greater brand loyalty. However, we’re still not seeing behavior that says brands have already emerged as being preferred brands with excellent recall, and people are willing to pay more for those brands yet.

That’s obviously a big trend. Very sophisticated marketers are entering the market, and that is their goal. We expect to see some making dramatic progress with the consumer in the next 12 months.

This author does not have any more posts.