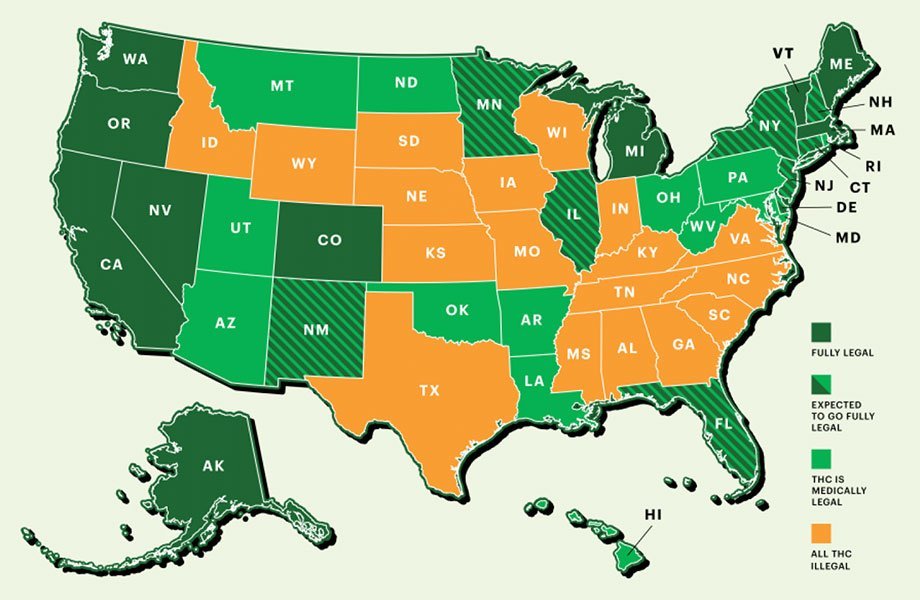 It is obvious that the movement toward legalization of Cannabis is not a matter of if, but simply of when. More states have realized that the overwhelming opinion among voters nationally is that Cannabis laws need to be dramatically altered and that cannabis should be decriminalized, demystified and legalized both medically and recreationally.  60% of Americans support legal recreational marijuana and 94% favor medical marijuana use, according to a recent Quinnipiac poll.

For far too long the stigma of cannabis and the myths that accompany it has created a false hysteria of its effects on individuals and on our communities. The result of laws disproportionally enforced and harshly applied continues to negatively impact communities, particularly economically disadvantaged communities, specifically communities and people of color.

The real issue is that most people who oppose legalization of Cannabis do so without researching anything about the plant, its nature, its history, its benefits or exploring factual and scientific data. We simply believe what we are being told by those who oppose it. The purpose of this article is not to change opposing opinion but simply to encourage the reader to be open minded and look at actual data. Don’t just look for information which supports your position but explore empirical data that may provide a different perspective.

WHY DO THE RESEARCH?

The fact is that legalization of Cannabis is not coming…. it is here. Although some may continue to oppose it. The benefits of legalization far outweigh the opposing view. Based on scientific evidence, its use provides medical, physical and psychological benefits to millions who use marijuana. The facts support its benefits for anxiety, stress, cancer, PTSD, arthritis, back pain and many more ailments are well documented scientifically. The facts support its use to relieve symptoms of withdrawal from opiates, alcoholism and other addictions. The facts support that no one has EVER died from an overdose of marijuana and that a person would have to ingest the equivalent of THC, about 20 pounds in one sitting of to be in danger of overdosing (that’s a boatload of blunts).

Factual data provided by states that have legalized marijuana have shown that crime does not increase due to legalization. Facts show that in communities having dispensaries and cultivation facilities crime may decrease due to enhance security.

According to recent studies by the National Association of realtors data shows that both commercial and residential real estate is positively impacted by dispensaries, cultivation and testing facilities and legal marijuana related businesses.

The economic benefits of legalization of marijuana are immense. Hundreds of millions of dollars infused into local economies, thousands of new jobs, dramatic increases in tax revenues resulting in lower taxes, new schools, more educational resources, better roads and more security enhanced first responder capabilities (Police, fire, emergency services). This does not even include the ancillary services needed to support this industry: plumbers, painters, electricians, construction workers, restaurants and other service-related businesses. Overall, the facts support that in states, cities, towns and communities that support the cannabis industry the quality of life is enhanced dramatically.

WHERE IS LEGALIZATION GOING FROM HERE?

Here is a snapshot is where analysts and those closely following this industry believe is on the horizon. The following is a list of New England and neighboring states and their positions on legalization of marijuana.

The Nutmeg State is so close to having legal marijuana that it might happen before 2020. Connecticut expanded its medical marijuana program in 2016. A legislative committee voted to send bill 5394 to the floor in 2018. With close to 71% of voters approving, the bill is a very strong possibility of its’ passing. It won’t be long until residents can light up legally.

It’s not a good look when the task force studying legal marijuana couldn’t garner the votes to pass its findings on to legislators. That’s what happened in Delaware, but since the state is already discussing it as a legislative matter, we’d say it is well on the way to having legal marijuana by 2020.

Voters approved growing and selling marijuana in 2016, but it’s been chaos ever since in Maine. Voters favor legal weed, but the back and forth among lawmakers and anti-drug hated governor Paul LePage kept delaying things. The newly elected Maine Governor made it official. Cannabis sales will start in 2020.

Rhode Island worked quickly to enact a red flag gun law that will let police take guns from certain people. Well, the state is doing the same with legal marijuana. The state has 18,000 people enrolled in its medical marijuana program, which is roughly 1.7% of the state’s 1.06 million people.

Voters will vote for full legalization in 2020, and considering how quickly the state moves on hot-button topics we won’t be shocked if Rhode Island has legal marijuana by 2020.

Just like in Michigan, it looks like New York is on the road to having legal marijuana by 2020 or soon after. Governor Andrew Cuomo isn’t a huge pot proponent, but in 2014 he signed legislation approving medical marijuana. More recently, he’s budgeted for legalization research. He is expected to seriously consider and approve legalization in 2020.

When it comes to legal marijuana in Maryland it’s when not if but when, at least according to the Baltimore Sun. Considering nearby Washington, D.C., already has very relaxed laws and Delaware is on the road toward legalization, and considering 61% of residents support it, we’d expect Maryland to have legal marijuana by 2020. Otherwise, it will be missing out on a pretty big source of revenue.

Decriminalizing marijuana was one of Governor Ralph Northam’s campaign promises. The potential health benefits and ‘racial injustice’ of possession arrests are two reasons he wants it decriminalized. Well, it didn’t take long to make it happen.

The state Senate voted 40-0 in favor of medical marijuana in early 2018. The governor’s strong pro-pot feelings and legislators who are willing to act give Virginia a great shot at having legal marijuana by 2020 if the state wants it.

A group fighting for recreational weed in Florida missed its chance to get it on the ballot for 2018, but it appears that lawmakers would be foolish to hold out for much longer. The population is strongly in favor and Florida is missing out on a substantial source of revenue by not legalizing it. Currently there is a petition gaining heavy traction for legalizing in 2020. Appears to be little chance that it will not be successful.